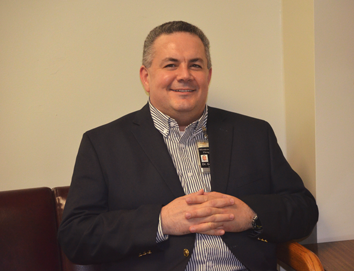 Dr. Ralph Greene, Jr., received his Ph.D. in Clinical Psychology in 2001 from The University of Kansas. Including his time as a Master’s level clinician, he has been practicing for over 25 years, and he is currently licensed in the State of Kentucky. While he has not received any formal awards as yet, at least one facility director proclaimed him a “Co-Conspirator” in the development of the hospital’s Recovery Services.

Dr. Greene described his theoretical orientation as Cognitive/Cognitive-Behavioral, and he has specialty training in cognitive therapy. He is also a certified instructor in CPI’s Nonviolent Crisis Intervention. His responsibilities include providing a full spectrum of services to persons with severe and persistent mental illness, offering staff training, and teaching new hospital employees about mental illness and Recovery and Resiliency Model philosophies in New Employee Orientation. Additionally, he greatly enjoys offering a large number of groups on Western State Hospital’s Recovery Mall.

When working with students and interns, Dr. Greene seeks candidates who are hard-working, personable, and willing to learn. He described his supervisory style as, “Direct, nurturing, and taking into account the supervisee’s level of development. I recognize that interns are here to learn and that it is my job to provide the optimal experiences and supervision for their further development.  I believe that each intern has strengths that can be further developed and from which I can learn.”   In his opinion, “Internship at Western State Hospital is challenging, inspiring, frightening, empowering, bewildering, and well worth it.”

When Dr. Greene isn’t working, he enjoys playing the guitar, “Not well, but with great enthusiasm.” He is an avid college and professional sports fan, and believes that the day after the Super Bowl should be a national holiday (especially if one of his preferred teams win). Dr. Greene is well-known at Western State Hospital for his ability to role play as a teaching tool, for his positive attitude, and for his excellent and relentless sense of humor. When asked to create his biography for this website, and to include several fun facts about himself, his list included the following items:

Debate him on these points, if you dare…