Hopkinsville, Kentucky is “black tobacco country,” where many farms still exist, supplying the cured leaf used to make chewing tobacco. This time of year, crops are heading to barns to hang in the rafters, with coals and wood smoking well on through Thanksgiving. People new to the area sometimes think the smoking barns are on fire!

The Pennyroyal Area Museum posted this feature today on Facebook: 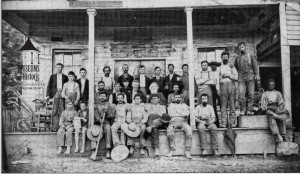 Today in Hoptown’s History
1907: The Hopkinsville Kentuckian reported that Night Riders had raided the Bainbridge district of the county. The newspaper described a terrifying scene of 75 masked, heavily armed men who visited a farmer to encourage him to join the Tobacco Association. The farmer was given until the next day to join – and was instructed to have it printed in the newspaper so that everyone could see it. He was also given a list of his neighbors that he was to en…courage to do the same.

The Night Riders visited two additional farmers that night. Their tactics worked. The newspaper reported 8 new members of the Tobacco Association on this date 108 years ago. This photo (from Gilkey & Turner’s book Christian County) shows the P’Pool and Woosley country store in Bainbridge in the same time period.

Want to learn more about the Night Riders? Come to the Museum’s http://www.museumsofhopkinsville.org/tobaccowar2015

This entry was posted in Announcements, Local Activities, Social. Bookmark the permalink.