The shootings at Fort Hood, Texas have inspired me to share my personal deployment experiences with you. I have not included relevant literature; rather, it is a brief personal account of my story in Iraq (2003). The intent is to initiate discussion between seasoned and neophyte therapists who have not had training opportunities working with men and women returning from combat. I will use the term soldier because of my Army experiences and like other organizations, there will be acronyms used that I will explain.

Receiving orders to deploy can be a frightening experience, especially when it involves a first time deployment. There are many factors involved once deployment orders are received including combat readiness training, medical history updates, family care plans, finance/insurance plans and more unit training to ensure the soldier is “squared away.”

The term squared away means to complete required paperwork expeditiously. There are countless hours of field training exercises required until the actual deployment. It seemed that I spent more time with my unit on post (Army installation) than with my loved ones at home. 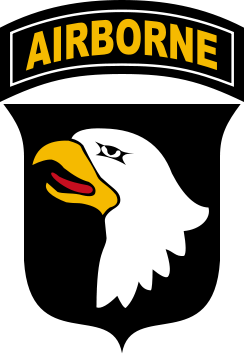 orders. Not only do you have to prepare for the unexpected, but thoughts of leaving your loved ones behind begin to ruminate. I deployed with the 101st Airborne Division, Screaming Eagles, 311th MI (military intelligence) BN (battalion), [Air Assault]. It was my first deployment after serving six

years of active duty service. I was among the enlisted ranks at the time as a Staff Sergeant (SSG) or E-6. Although I was in a leadership role and was required to be strong for soldiers in my squad, I was anxious, scared, and did not know what to expect. I was told by my First Sergeant (ISG; E-9) and Commander (0-3) that some of my fellow soldiers may not return home alive. At that point, one tries to contain fear because you are surrounded by soldiers dealing with the same fears.

Fast forward to the actual deployment and landing in Kuwait where there were literally thousands of soldiers waiting to surge into Iraq. The mission of the 101st was to convoy through enemy territory northward until positioned in Mosul, Iraq. The convoy was long and very scary. I remember convoying through Baghdad and seeing buildings blown to pieces while other buildings were riddled with bullet holes. Thoughts of death took center stage while traveling through Baghdad. CNN live camera feeds could not capture the magnitude of destruction of what I saw with my own eyes. Finally, we made it safely to an abandoned airfield called Qayarrah West located about 30 miles south of Mosul. Q-West as the airfield became known was my place of residence until I was redeployed home just shy of a 12-month tour of duty. The first few months at Q-West were pretty quiet. Conducting operations in and out of town for the most part were not met with resistance or gunfire.

However, after six months, there was incoming mortar fire that occurred nightly on the outer perimeters of Q-West.  Q-West Security measures tightened significantly. Our convoys began taking rocket-propelled grenade (RPG) fire and improvised explosive devices (IEDs). Cordon and search missions of local villages were daily occurrences looking for any signs of the enemy. Thankfully I was not engaged in any direct fire or had to discharge my weapon, but many infantrymen were engaged in fire; many were either killed or wounded. Hearing about a soldier killed in action has negative effects on one’s thoughts because perhaps maybe the next bullet or the next attack will involve you or your soldiers.

Post Traumatic Stress Disorder (PTSD) affects countless young men and women in uniform. What is the relevance of my story? What lessons could be learned for those who do not work with soldiers on a daily basis?  What was described briefly in my story was the deployment process, which involves three phases: pre-deployment, deployment, and post-deployment. Explaining each phase is not the scope of this post. For more information about the deployment process, checkout militaryonesource. Each phase carries with it a level of distress and anxiety. Many soldiers reintegrate with their family members feeling guilty, depressed, and anxious. Common behaviors involve substance abuse, domestic violence, and agitation that not only impact the soldier, but the family as a whole. While there is evidence in the literature to assume that direct gunfire may cause symptoms of PTSD, it cannot be discounted that having no exposure to direct combat excludes one from PTSD symptomatology. This can be an interesting topic for further research.

As therapists, what is significant is the examination of how the deployment process affects soldiers and their loved ones. It is also important to recognize that soldiers bring to therapy a culture unique to the Army experiences including language, acronyms, rank structure, and strict adherence to mission accomplishment. Many soldiers will want to talk with others who can relate to what they have gone through. As a therapist, breaking through these schemas will take time and requires understanding, empathy, and utilizing listening skills. The combat experience itself has exclusively been a huge part of the therapeutic process, but to gain greater insight into the soldier, one must look into their pre-deployment experience to develop a trusting and safe environment so the soldier feels connected and not judged.  Also, therapists should be mindful of confidentiality issues in the sense that Commanders can have access to therapy records, which can affect the soldier’s willingness to be forthcoming in sessions. The soldier may be fearful of unit stigmatization, loss of promotion opportunities, or being ostracized by fellow soldiers.

Reference:
Military Deployment Guide: Preparing you and your family for the road ahead.  Military One Source. Retrieved from http://www.militaryonesource.mil/12038/Project%20Documents/MilitaryHOMEFRONT/Service%20Providers/Deployment/DeploymentGuide.pdf