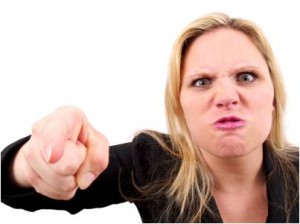 It happens all the time.  Everyone does it.

We frequently have to deal with the reckless driver who blows a stop sign, the rude man who pushed his way to the front of the line at Starbucks, the clumsy waitress who spills the drinks while delivering them to the table.  We make decisions about people’s dispositions after seeing them perform one action, without taking into account pertinent situational factors. It is far less often that we put forth the cognitive effort to consider such situational influences.  It could very well be that the driver who neglected to stop at the stop sign did not see the sign because there was a tree branch blocking it, the man at Starbucks was actually rushing to the front of the line was actually giving another person in the front his credit card that he had dropped by the door, and the waitress was tripped by one of her coworkers who was playfully teasing her.

We do not tend to think of situations in this way.  It is more likely that we would attribute these behaviors as a manifestation of the disposition of these individuals. Social psychologists call this the Fundamental Attribution Error.  Lee Ross was the first to use this term to describe the phenomenon. He went so far as to argue that the Fundamental Attribution Error is the “conceptual bedrock” of the field of social psychology.